These words flooded Aurea with joy and gave her strength to continue her journey. Then – wonder of wonders! – she caught sight of the longed-for planet! 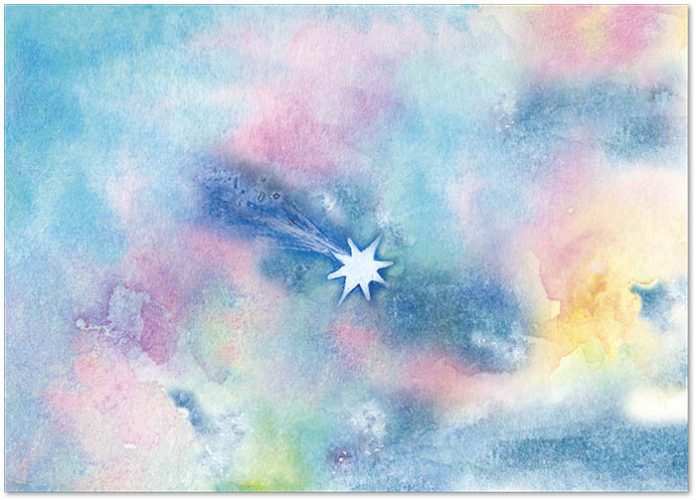 “Let there be lights in the firmament of the heavens to separate the day from the night; and let them be for signs and for seasons and for days and years” (Gen 1:14). Such were the words of God when He created the stars – words that forever resound in their “ears”. Yes, these words became the motto the stars lived by.

But not all stars dwell close to our planet; some shine far, far away. One such star, named Aurea, lived at a distance that is difficult to calculate. Being a deeply pensive star, she always pondered to herself: “My mission is to serve as a sign, and to measure times and seasons. But how and where will I fulfil this duty? It’s all so dark here… and so remote.”

Aurea travelled from one galaxy to another mulling over this doubt, until she came across a shimmering star, with an especially intense glow. She approached it and said:

“Venerable star, may I ask you a question?”

“The divine command resounds as the ideal we exist for. But, I don’t know how to obey it. To whom shall we serve as a sign? What times will we be signs of? We live in this darkness, and only see other stars around here… Could you explain this to me?”

“Dear little star, everything in the universe has a purpose. In our case, we were created for the benefit of human beings. The light we emit marks events for them, and our presence can have great meaning in their lives and even in human history.”

“Ah, human beings! I know that they were made to govern created things. How wondrous it is to serve people, made in the image and likeness of God! But the space that separates us is immense… It makes me feel a little daunted!”

“It is true that you still have a long way to go before you will come close enough to Earth for your light to reach it. But distance should not be cause for sadness, but for joy. The longer the delay, the more glorious the day of your arrival will be.”

Touched by those words of encouragement, Aurea thanked the glittering star. They bid each other farewell and continued on their separate ways.

With bolstered hope, the star looked forward to that grand day with growing eagerness. She went on, and on, and on… However, there were still many light years ahead, before she would reach her goal.

The journey was long, and some stars gave up halfway, preferring to die in oblivion rather than persevere in enthusiasm. When Aurea felt the first whispers of sadness, and discouragement knocked at the door of her heart, she remembered the words of that experienced counsellor: “The longer the delay, the more glorious the day.”

At a certain point, she had a providential encounter when her path led her close to a large constellation, and she was curious to meet its members.

“My luminary friends! I’m sorry to interrupt your conversation, but please tell me: has your brightness already illuminated the Earth?”

“Oh yes! It was unforgettable!” replied one of them.

“We are truly blessed, for we shone on a very special night!”

“Really? What night was that?” asked Aurea.

“We were the ones lighting the firmament when a patriarch heard from God: ‘Look toward heaven, and number the stars, if you are able to number them… So shall your descendants be.’ (Gn 15:5). It was Abraham! He tried to count us – but in vain! After all, there are so many of us! He admitted that he was unable to do so, and made a sublime act of trust in the Almighty.”

Aurea did not know what to say; the account had impressed her profoundly. She thanked them and moved on.

Becoming a little distressed by the delay, she came across another heavenly body and decided to ask how much time was left till Earth. As she approached, she noticed that it was a star of a greyish tone, completely devoid of glow and bearing an expression of deep sorrow on its face.

“Earth? I don’t have good memories of that place…”

“I was fascinated with the idea of spreading my light to mankind, but when I arrived there, I saw an appalling sight: some of them were worshiping a golden calf! The chosen people had put aside the worship of the true God to adore an idol that they themselves had made… With that, I lost my luminosity, and so did the other stars that were with me. It was the Creator’s manner of showing His displeasure with that sin.”

“I’m sorry for your sad fate… What a horrible thing it is to offend our Father! My friend, thank you so much for revealing to me such a great and moving event. It has helped me to understand yet another aspect of the Lord!”

“It was a pleasure! I hope you shine your light upon those who truly love Him. You will be arriving before long. Have confidence and be steadfast!”

Aurea left the conversation apprehensively: “Will I also witness the infidelity of mankind? Lord, deliver me from such a disgrace!”

She kept advancing in haste, but now she somehow dreaded reaching Earth. At a certain moment, a special glow, more radiant than the other heavenly bodies and never before seen in the universe, approached Aurea. A gentle and harmonious voice was heard:

“Onward, little star! Behold, a very great grace lies in store for you. Go just a little further, and you will fulfil your mission!”

The light grew dimmer until it disappeared. Those words flooded the star with joy and gave her strength to carry on.

And then – wonder of wonders! – Aurea caught sight of the planet! Further on, she could also hear a unique melody wafting towards her. And as she came closer, the sound became clearer, so that she could make out the words of the lovely hymn: “Blessed are the stars that saw You as an infant!” Soon Aurea saw hosts of Angels, who were praising the birth of someone very important.

Again, that bright and mysterious light appeared, this time revealing a figure. It was the Archangel St. Gabriel, who proclaimed:

“You were chosen by God to adorn the skies at the birth of the Blessed Virgin Mary, the Lord’s Chosen One, destined to be Mother of God. Your immense brilliance, visible and radiant even at mid-day, will delight the Queen of the universe!”

As soon as the Archangel had finished speaking, the star felt something new within her and her light intensified. She looked upon the Earth, and saw that Our Lady’s eyes now rested on her. The heavenly messenger then began to sing:

“Blessed are you, O star, for you were the first creature that Our Lady contemplated! This is the prize and the victory of those who persevere to the end!” ◊

The Secret to Heroism