Statue of Our Lady of Fatima Arrives in Ukraine

On March 17, the pilgrim statue of Our Lady of Fatima arrived in Lviv, in western Ukraine, and was welcomed by hundreds of faithful awaiting Her in the Church of the Nativity, where She began her visit to the city.

Before the Russian invasion into Ukrainian territory, the Greek-Catholic Archbishop of Lviv, Ihor Vozniak, CSsR, had asked the Fatima Shrine in Portugal to send the pilgrim statue, a request that was promptly answered.

This is the first time that the pilgrim statue has ever made the journey to be present in Ukraine.

An unexpected phenomenon has been observed in Western countries, especially in France and Spain: the number of adolescents asking to be baptized is increasing. They are often the children of non-Christian immigrants and of other cultures, but there are also young people from Catholic families who have fallen away from the Faith.

This came as a surprise to parishes, which had no catechesis designed for this age group, whose needs are very different from those of adults and children, the usual entrants in Baptism preparation classes.

According to information gathered by Joëlle Eluard, who directs catechesis and catechumenate services for adults in French dioceses, it is estimated that in France alone about three thousand teenagers have been baptized each year since the unusual phenomenon was first observed in 2016. 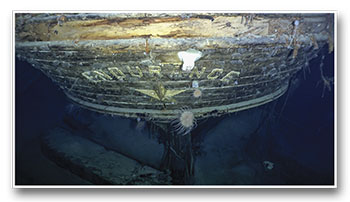 To imagine that a shipwreck could be found at the bottom of the sea in good condition, over a century after its sinking, may seem like a pipe dream. But that is exactly what happened: on March 5, a team of sixty experts found the famous barquentine Endurance in the Weddell Sea, at a depth of 3,800 metres.

The vessel set sail from the port of Plymouth, England, bound for Antarctica in 1914. On board was Ernest Shackleton, organizer of the expedition, accompanied by twenty-seven men whose goal was to accomplish the then-unprecedented feat of crossing the frozen continent on foot. However, only a day’s navigation away from the landing site, the Endurance was trapped in an ice floe in the Weddell Sea, and eventually sank.

Shackleton and his companions’ struggle for survival became a paradigm of fortitude in the face of adversity, as well as the model of a crew’s loyalty to their captain and tireless zeal on his part. After the shipwreck, he set off on an almost impossible mission with a minimal crew in search of help, leaving the rest of his men united in the certainty that he would not abandon them, but would return to rescue them, as in fact miraculously happened months later.

Ecclesia Cantic is the first movement of students and young professionals specialized in the art of chant in France, who have come together at the national level around the theme of liturgical chant, for the purpose of promoting the beauty of the Liturgy and evangelization through music. The association is present in various French parishes and dioceses and holds a national assembly for its members every eighteen months.

The most recent of these meetings took place in Lille on March 26 and 27, and brought together about a thousand young Catholics. The programme included several conferences and prayer sessions, concluding with a public concert in the Cathedral of Notre-Dame de la Treille. Part of the initiative is to awaken the spirit of evangelization among young people, who are sent to city centres in small choirs to “bring the joy of the Gospel to its inhabitants.” 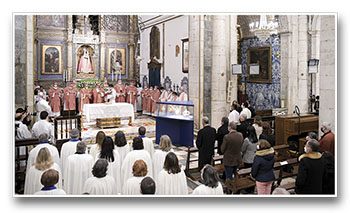 The Jubilee Year marking the 375th anniversary of the crowning of Our Lady of the Conception as Queen and Patroness of Portugal was concluded in March at the Shrine of Vila Viçosa. The solemn Eucharist was celebrated by Bishop José Ornelas Carvalho, SCI, Head of Leiria-Fatima diocese and President of the Portuguese Episcopal Conference, and was attended by several bishops of the country, as well as civil and military authorities, including the country’s President.

The celebrant highlighted the profound meaning of the ceremony, linked to Portugal’s roots and identity. At the end of the commemorations, the President decorated the Royal Confraternity of Our Lady of the Conception of Vila Viçosa as an honorary member of the Order of Merit, a Portuguese award in recognition of praiseworthy acts and services to the nation.

In little more than a month of war, 924 convents in Poland and 98 in the Ukraine, of the almost 150 religious congregations present in both nations, have welcomed thousands of refugees, providing spiritual, psychological, medical and material aid. According to the Conference of Major Superiors of Religious Orders in Poland, the number of beneficiaries is estimated to be as high as 18,000.

In addition to offering shelter, the religious Sisters work to collect, prepare and serve food to the refugees, to integrate them into the labour market, to act as translators and organize classes for children and adolescents. They are also at the forefront of the collection of items internationally to be sent to Ukraine.

Sixty-year-old Fr. Jonathan Good­all was ordained a Catholic priest last March 12 by Cardinal Vincent Gerard Nichols, Archbishop of Westminster in England, and will become the parish priest of St. William of York Church in London.

Fr. Goodall was an Anglican bishop and resigned from this ministry in September 2021 when he announced his conversion to Catholicism. “I have arrived at the decision to step down as Bishop of Ebbsfleet, in order to be received into full communion with the Roman Catholic Church, only after a long period of prayer, which has been among the most testing periods of my life,” he stated.

Satanic vandalism in the United States

On February 23, religious statues were vandalized and defaced with black ink at Holy Family Church in Jacksonville, Florida. The words “Hail Satan” were written on the statue of the Child Jesus along with vulgar markings, and a satanic symbol was drawn on the forehead of the statue of St. Joseph.

Security cameras recorded three suspicious people at the scene at night, who were sought by police. The attack is one more in a disturbing wave of disrespect and sacrilegious acts committed against Catholic churches in the United States.

Priests of Christ and Ministers of the...

I Will Fight for Your Love