In the early hours of May 16, the house of the Heralds of the Gospel located in Sevilla la Nueva, Spain, was the scene of anti-Catholic vandalism. A group of people could be heard in the early evening uttering words of hatred against God and Our Lady, as well as curses against the Heralds. Only the following day was it discovered that someone had entered the property and destroyed a statue of Our Lady of Graces that stood in the garden, as well as a crucifix that was being restored in a workshop. Pieces of both images were left strewn across the property.

According to members of the community, it does not seem misplaced to find the cause of this religious hatred in the highly slanderous news propagated by the media in previous weeks, which aimed to denigrate the association and drive away its followers in the Iberian nation.

In order to redress this sacrilege, the members of the Heralds of the Gospel joined by their sympathizers organized a solemn ceremony of reparation, which allowed them to demonstrate their love for Jesus and Mary, as well as their condemnation of the profanation committed. The act began with Holy Mass, followed by the exposition of the Blessed Sacrament, which was carried in procession, together with the statue of Our Lady of Fatima, to the place where the destroyed statue of the Virgin had been venerated. There the remains of the vandalized images were placed on an altar for the veneration of all. 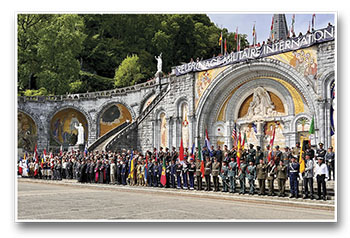 From May 13 to 15, thousands of military personnel were able to return to Lourdes to participate in the International Military Pilgrimage, interrupted two years ago due to the pandemic. Instituted after the Second World War, the annual event has become one of the largest celebrations of Catholic soldiers, and this year brought together more than ten thousand three hundred pilgrims from forty-two nations, ranging from combat veterans to active service members, many accompanied by their families.

The American delegation prepared three thousand prayer kits – consisting of a rosary, an image of Our Lady of Lourdes, another of Blessed Michael McGivney, founder of the Knights of Columbus, and a bottle of Lourdes water – to be sent to Ukraine and distributed to soldiers, both wounded and active.

A report published by the Diocese of Vannes, in France, in preparation for the Synod of Bishops, indicates that young people are increasingly coming to the Holy Church seeking doctrinal clarity, a Liturgy celebrated with sacrality and the visibility of clerics.

This generation, according to the document, has aspirations contrary to those of the previous ones, which “tend to be critical of the Church and her rites, sacrality, the priesthood and the clothing of clerics.”

Latin America takes up the Rosary for Men

“For where two or three are gathered in my name, there am I in the midst of them” (Mt. 18:20), promised the Divine Master. Inspired by these words, thousands of men continue to spread the Rosary for Men: after spreading throughout Europe, the movement is also gaining new followers in Latin America.

Already very active in Brazil, on May 28, Argentina, Colombia, Costa Rica, Paraguay, Puerto Rico and Peru joined the army of prayers, promoting the recitation of the Rosary in public places. In Buenos Aires alone, more than 2,500 men came to the Plaza de Mayo, in front of the cathedral, to pray the Rosary.

On the morning of May 11, ninety-year-old Cardinal Joseph Zen Ze-kiun, SDB was arrested by the Chinese police. He was accused of acting as a trustee for a relief fund destined to defray the legal defence expenses of demonstrators arrested for taking part in protests for freedom in Hong Kong. The Cardinal is Bishop Emeritus of the local diocese, which he presided over from 2002 to 2009, never hiding his rejection of communism. After international pressure and the payment of bail, the Cardinal was released around 11pm that same day, but will have to answer to an administrative tribunal.

A few days later, the police of Hebei Province arrested seven priests and ten seminarians of the Xianxian Diocese and, the following day, Most Rev. Zhang Weizhu, its bishop. This ecclesiastical circumscription is not recognized by the Chinese Communist Party which, for this reason, considers all its religious activities illegal and criminal.

Indirect descendant of St. Joan of Arc participates in feast in her honour 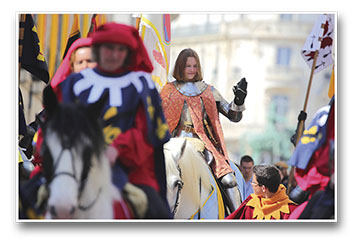 The traditional feast in honour of St. Joan of Arc celebrated in Orleans, France this year featured the participation of Clotilde Forgeot d’Arc, a descendant of Pierre d’Arc, brother of the warrior virgin. Clad in armour and carrying a standard, the fifteen-year-old girl paraded on horseback through the city streets representing her holy ancestor.

The commemoration has been held in Orleans for centuries, and since 1945 a young girl from the city has been chosen for this role. Candidates must meet three requirements: be a practising Catholic, have lived in Orleans for at least ten years and be enrolled in one of its schools.

Dom Geoffrey Kemlin, forty-three years of age, has been elected abbot of the Benedictine monastery of Saint-Pierre de Solesmes in France, succeeding Dom Philippe Dupont, who submitted his resignation after twenty years as superior.

The new abbot will also assume the presidency of the Benedictine congregation of Solesmes, to which more than thirty monasteries located in France, Spain, England, Canada and the United States, among other countries, are affiliated; totalling more than six hundred monks under his aegis.

Incorrupt body of St. Isidore on display in Madrid

On the occasion of the jubilee year commemorating the four hundredth anniversary of the canonization of St. Isidore the Farmer, patron Saint of Madrid, his relics were displayed for the veneration of the faithful in the collegiate church dedicated to him in the Spanish capital.

The tomb that holds the incorrupt body of the Saint who died 850 years ago was opened on May 21 and, in just three days, more than thirty thousand devotees, from the elderly to children, stopped to venerate it.