This year Caritas Spain completes seventy-five years of service. The institution came into being in the difficult post-war period both nationally and worldwide, with a view to addressing the great hardships the population was facing at that time. In 1947, the founding statutes were drawn up, constituting Caritas as we know it today. Over time, the organization has expanded to the point of undertaking charitable efforts on an international level. Today it runs more than sixty projects in forty countries of Africa, South and Central America, Asia, Eastern Europe and the Middle East.

The commemorations for the anniversary culminated on July 1 with the celebration of a Mass of thanksgiving presided over by Cardinal Carlos Osoro Sierra, Archbishop of Madrid, in the Cathedral of Our Lady of Almudena. Caritas Spain thus wished to thank all the agents, volunteers and donors who make its work for the benefit of the most vulnerable people possible.

Eucharistic campaign is promoted in the United States

A survey conducted in 2019 by the American agency Pew Research Center, pointed out that only about 31% of Catholics in the United States believe in the Real Presence of Our Lord Jesus Christ in the Eucharist. In view of this, on June 14 the Archdiocese of Detroit, with the help of Hallow App, launched the I Am Here campaign, which aims to promote a true devotion to Jesus in the Eucharist.

Among other resources, the initiative features numerous testimonies from the faithful regarding the change experienced in their lives by Eucharistic Adoration, as well as making an app available on its website with meditations and explanations about the Eucharist, encouraging the faithful to listen to them during a visit to the Blessed Sacrament in their parish.

Beatification of the Lebanese martyrs

On June 4, the Catholic Church in Lebanon had the great joy of celebrating the beatification of two Franciscan priests who died as martyrs during the First World War. Fr. Léonard Melki and Fr. Thomas Saleh were childhood friends and both joined the Order of Friars Minor. Under false accusations, the former was arrested and brutally tortured until he was shot dead on June 11, 1915, in the desert, with 417 other prisoners. Fr. Thomas Saleh, on the other hand, was condemned to capital punishment on charges of conspiring against the Ottoman Empire, for hiding an Armenian priest persecuted for belonging to that people. He died on January 18, 1917 of malnutrition and typhoid while walking to the place of execution.

From June 21 to 23, the Colombian Bishops’ Conference held the Second Course on Exorcism and Liberation Prayer in Bogotá, which brought together bishops and lay delegates from all the dioceses of the country, and was delivered by speakers from several different areas.

As Bishop Gabriel Londoño Sepúlveda, exorcist of the Archdiocese of Bogotá explained, the meeting aimed at responding to the new spiritual circumstances that are emerging not only in Colombia, but throughout the world, helping ministers in their care for so many people who feel under attack by evil. 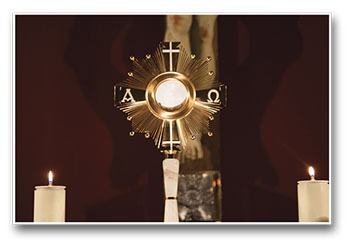 The number of chapels destined for Perpetual Adoration in Spain has continued to grow. Since March 2020, despite the restrictions imposed by the Covid-19 pandemic and its consequences on religious practice, five new Adoration chapels have been opened, bringing the total to seventy throughout the country.

Javier Taberner, one of the driving forces behind the devotion in Spain, highlights that this is a symptom that “people are revaluing the importance of having the Lord close to us twenty-four hours a day.”

From Swiss Guard to seminarian

After eight years in the Swiss Guard, thirty-two-year-old Didier Grand­jean decided to leave his post as a non-commissioned officer in the armed corps to enter the seminary. As he himself reported to an Italian news agency, during his time in the Eternal City he gradually felt the call to serve Our Lord more closely and to dedicate his life entirely to Him. Thus, after long reflection, he concluded that priesthood is the path that God wants him to take.

Martyrs for chastity beatified in Poland

On June 11, Cardinal Marcello Semeraro, Prefect of the Congregation for the Causes of Saints, presided at the beatification ceremony of ten Polish nuns who suffered martyrdom at the hands of Soviet troops in 1945. Sister Maria Paschalis Jahn and her companions belonged to the Congregation of the Sisters of St. Elizabeth, and died in different cities defending their faith and chastity after being attacked by Red Army soldiers.

The nuns’ elevation to the altars is also a way of honouring all the other consecrated women executed by Soviet soldiers during the war period. It is estimated that in the Congregation of St. Elizabeth alone, more than a hundred sisters were murdered in similar circumstances.

Christians obliged to abandon their homes

A report published in June by Open Doors, an NGO working for religious freedom, reveals that Christians in fifty-eight countries – out of the seventy-six where they suffer the most persecution worldwide – have been forced to leave their homes because of the Faith they profess.

Social or family pressure, laws against “apostasy and blasphemy”, political instability and the impositions of extremist groups are among the main factors provoking this situation. According to Helene Fisher, one of the specialists responsible for the research, “Displacement is not just a by-product of persecution, but, in many cases, it is an intentional part of a broader strategy to drive out Christianity from the community or country.”

Two more priests have joined the victims of the religious persecution ravaging Nigeria. On June 26, armed men murdered Fr. Vitus Borogo, chaplain of the Catholic community at the Kaduna State Polytechnic, at the Correctional Centre along Kaduna-Kachia road. On the same day, Fr. Christopher Odia of Auchi Diocese was kidnapped while on his way to Sunday Mass, and subsequently killed.

A few days earlier, three people died and forty others were kidnapped in an attack on St. Moses Church in northwestern Nigeria that occurred during Sunday Mass. And on June 5, the Solemnity of Pentecost, some forty worshippers lost their lives in the massacre perpetrated by armed terrorists at St. Francis Xavier Church in the south-west of the country.

Queen of the Divine Will