Through her maternal intercession, Dona Lucilia has helped many souls to understand the goodness of the One who, more than her, wishes to grant men precious and inexhaustible treasures.

Dona Lucilia’s intercession has been a beacon for numerous souls who are floundering on the stormy sea of life. Thanks to her inestimable aid and affectionate protection, many of her devotees can more easily understand that for God nothing is impossible.

Indeed, she who knew how to draw from the beating of the Sacred Heart of Jesus the necessary strength to make her life a constant manifestation of divine goodness, has today brought countless people closer to Him who “so loved men and was so little loved by them,” helping them to face the struggles and sufferings of earthly life.

“Maybe if you prayed to her, things would change”

Consoled by Dona Lucilia’s generous protection, Mrs. Elma Regina dos Santos, from Jacareí (Brazil), sends her testimony, wishing to express her gratitude for the benefits received through her “friend who lives in Heaven.” She relates:

“In 2019 I was very sad, suffering from depression, my life was in the doldrums, and there was nowhere to turn. I only went back and forth from work to home, and there was no extra money for anything. I needed to fix up the yard of my residence, which was nothing but an ugly patch of dirt.

“One day I called my mother and said: ‘Mom, my life is so depressing.’ She answered: ‘Look, I received the Heralds of the Gospel magazine, which tells of a person called Lucilia. Who knows, maybe if you prayed to her things would change.’ Then I thought: ‘Well, I have nothing to lose, so I’ll pray to her.’”

“Dona Lucilia, get me out of this sad state and give me the means I need!”

Following her mother’s advice, Elma began to pray every night: “Dona Lucilia, help me! Dona Lucilia, get me out of this sad state and give me the means I need!”

However, in spite of praying insistently to this generous lady, another setback put Elma’s faith to the test: “It was raining very, very hard in my town, and there was a downpour. Suddenly I heard a loud noise in my house. I ran to see what had happened: the retaining wall of my yard had collapsed. There was only rubble left.”

Elma was even more disheartened by this tragic situation: “I had no money for bricklayers, for anything. I could barely pay the bills! I was swamped with debts. Then I called my mother in despair: ‘Mom, you told me to pray, I prayed and everything went wrong, worse than before!’ She replied: ‘Imagine! If she wasn’t going to help, she certainly would not harm you! Let’s be confident! You are praying, right? Have confidence!’”

Dona Lucilia was in fact helping

Elma continued to ask for Dona Lucilia’s assistance. And it was not long before her prayers were answered. She recounts: “Two days later my mother called and said: ‘Elma, you have been making your house payments, haven’t you? The house is insured. Call the insurance company and ask them to send someone to assess what happened.’”

In fact, Dona Lucilia had already begun to help her: after the assessment made by an engineer from the insurance company, Elma was entitled to receive compensation and to rebuild the wall. The problem, which seemed insurmountable, was solved.

However, she was still hoping that her first request would also be granted: to obtain the resources to make proper upgrades to her yard and buy some furniture. But for this to happen, she first had to overcome some obstacles that had arisen in her husband’s retirement process. Elma already knew where to find the solution: “As we still lacked a lot of what we desired, I began to pray to Dona Lucilia, asking her to help with my husband’s retirement.”

Once again, help was not long in coming: her husband managed to get his pension, which made it possible to buy the furniture and build all the desired structures in the yard. “Everything turned out very well,” says the happy beneficiary.

Grateful for the benefits received, Elma affirms: “I owe all this to Dona Lucilia. During the construction of the wall and the work on the yard, I had problems getting bricklayers and material… But every time I asked her intercession, out of nowhere a bricklayer appeared; and out of nowhere we found a cheaper place to buy the material. We managed to work a real miracle with our house. We are very happy here and we have the house of our dreams. Everything was Dona Lucilia’s doing. Today I know that I have a friend in Heaven called Dona Lucilia.”

Photos of the yard of Elma’s residence, before and after the renovation
1 of 3

Since then, Elma has not ceased to ask her protector for help, and to spread the news among her relatives and acquaintances of her opportune  and maternal intercession: “Such is my confidence in Dona Lucilia that, seeing my brother suffering with intestinal cancer, which had brought him great pain and anxiety, I told him: ‘Put Dona Lucila’s picture under your pillow, she will help you.’” And already the next day her brother received some reassuring encouragement: he awoke in good spirits and determined to fight against the terrible illness.

Little by little, Elma’s confidence is benefiting other members of the family: “My sister is undergoing chemotherapy for breast cancer and, since she took Dona Lucilia’s photo, her discomfort has diminished, and she is encouraged and hopeful of a cure.”

Elma concludes her testimony with this uplifting statement: “Dona Lucilia is powerful and really intercedes for us when we ask her with faith. She is my friend who lives in Heaven and helps me all the time!”

Maria Cecilia Silva from Cuiabá (Brazil), for her part, amazed at how quickly her request was answered, writes to us about a grace received through Dona Lucilia:

“On April 5, 2019, I received the news that a friend, Mrs. Elaine Bonifanti, was seriously ill, admitted to the ICU, diagnosed with pleural effusion and suspected swine flu. So we began to pray… On the 7th, the first Saturday of the month, we entrusted the resolution of this problem exclusively to Dona Lucilia and promised to say a Rosary in thanksgiving as soon as she got better.”

Dona Lucilia soon placed her reassuring shawl over the prayers of Maria Cecilia and obtained a sudden change in the sick woman’s condition: “The following day, we received news that Elaine had suddenly improved. On the 9th she could be transferred to a room. And on the 13th she was discharged and went home.”

In less than one week since her request to Dona Lucilia, the problem was solved!

Having to undergo an ultrasound-guided biopsy on her right breast, Maria da Solidade Braúna Gomes, from São Paulo, asked for Dona Lucilia’s intercession, in order to obtain a good result from this examination.

And what was her surprise to see how quickly her prayers were answered: “When starting the ultrasound, the doctor informed her that the biopsy would no longer be necessary, because the alteration indicated by the previous exam was no longer present; there were only simple cysts.”

Dona Lucilia is ready to ask the Sacred Heart of Jesus for courage, tranquillity and hope for those who invoke her, helping them to solve all their problems. In this way she has helped many souls to grow in confidence and love for the One who, more than she, can bestow precious and inexhaustible treasures. ◊ 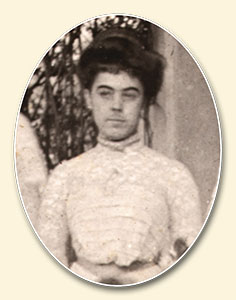 “Blessed are the Meek”

Her thoughts, turned to lofty considerations, can be noted in her gaze. She exhibits the well-being of virtue, of the acceptance of suffering peacefully.

The photograph of Dona Lucilia reproduced on this page presents her in the flower of her youth, during the final years before her marriage. She is on a porch, probably of the house at the Jaguary Ranch in São João da Boa Vista, belonging to her father, Dr. Antônio Ribeiro dos Santos.

Her thoughts are turned to higher things, which is noticeable in her gaze. Her expression denotes a seriousness beyond her years, belonging to one who has understood life to its depth, and knows how truly the Salve Regina qualifies it as a “valley of tears.” Despite this, she shows no sign of discouragement, dejection or bitterness. On the contrary, she radiates sweetness, gentleness and kindness. She clearly possesses the wellbeing of virtue, of suffering accepted and lived in peace – peace that, in a discreet way and without realizing it, she spreads all around her.

One of the Beatitudes in particular comes to mind in seeing Lucilia in these circumstances: “Blessed are the meek, for they shall inherit the earth” (Mt 5:5).

No one can maintain a life of lasting virtue without the help of divine grace. In this photograph, considered within the sequence of those that precede it, a well-led interior life is revealed, immersed more and more profoundly in tender devotion to the Sacred Heart of Jesus and His Most Holy Mother.

The Sacred Heart of Jesus; a lifelong devotion

In her youth, Dona Lucilia received from her father a beautiful and pious statue of the Sacred Heart which would play a significant role in her interior life and would be with her as she made her last Sign of the Cross. She kept it in a simple wooden oratory in her own room. It was of French origin, and was purchased by Dr. Antônio in Casa Garraux, São Paulo’s largest bookstore, which also sold a variety of European articles such as wines and sculptures.

The motive of this paternal gesture was to stimulate Lucilia’s piety, for her father was touched to see that she prayed the Rosary every afternoon, leaning against the sill of a window that overlooked the grounds behind the family mansion.

Through this image, Lucilia recognized, admired, and adored the Sacred Heart of Jesus – always so good, merciful, and ready to pardon, yet so serious. Overflowing with affection, but never smiling; He always seemed to convey a certain sadness, as though measuring the depths of human wickedness, and suffering much on account of it. This was why His Sacred Heart was crowned with thorns and pierced with the lance of Longinus.

His features expressed the poignant complaint He made in the famous phrase addressed to humanity through St. Margaret Mary Alacoque: “My daughter, behold the Heart which has so loved men, but which is so little loved in return!”

Through devotion to the Sacred Heart of Jesus, the desire grew in Lucilia’s heart to only practice good. ◊

Assistance in Any Situation

The Reward for Having Faith

A Lady from Better Times