Home Story for Children In Search of the Lost Sheep 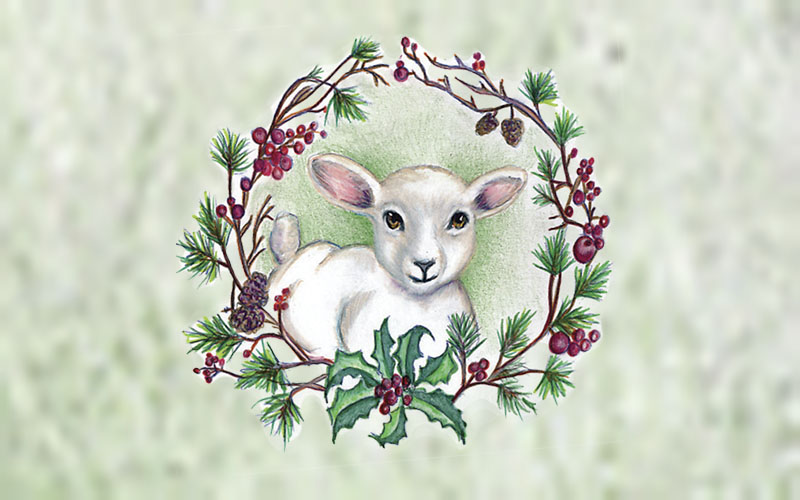 Bethel had disappeared! As Hannah went to get help, she heard pipes and drums playing, and voices that rang out in jubilation. What might it be all about?

It was December. The sun’s rays warmed the green pastures of Star Meadow, where a large flock grazed, tended by a cheerful girl named Hannah. She was the daughter of Simon, a seasoned shepherd of the region. Now a tall, slender twelve year old, she had learned the art of tending sheep from her father since she was seven. She often wore a pale green tunic with a lilac waist sash and a pinafore of the same tone as the traditional veil that encircled her contented face.

For Hannah, the work was no burden. She knew each sheep like the palm of her hand: she knew what type of grass each one preferred, knew how to enliven the lazy ones and calm the overly frisky, and even called each sheep by name. Hers was no small flock; the sheep numbered a hundred and twelve, including the youngest, whom she had named Bethel.

For their part, the sheep knew their dedicated shepherdess very well. They seemed to understand everything that she said, and they kept her entertained during the long afternoons she spent in the fields with them.

When she led the sheep home, she always checked to make sure that none were missing as she gathered them into the fold.

On evening, as the sun sank slowly behind the slopes to make way for emerging stars, Hannah started to review her “troops”.

“Bethel! Bethel?” Not a sound was heard.

This adventurous lamb had the habit of slipping away unseen to explore hidden pathways and practise leaping over boulders and fallen tree trunks… And this time she had wandered all too far.

“Bethel is lost! I lost my lambkin!… Oh Father Abraham! What will Papa say? He will be so displeased. Poor little Bethy all alone in the dark, at the mercy of ravenous wolves…,” thought Hannah, distraught, as she ran to find her father.

Arriving at the house, Hannah heard pipes and drums playing, and voices that rang out in jubilation. “What might be happening? Could it be that they found my lost sheep?”

Upon entering, she found the house full of shepherd folk from near and far. All were excitedly preparing for a journey, when the normal activity of that hour was to settle down for a well-deserved rest… “What is the big occasion?” she wondered.

“Hannah! Alleluia! Are you ready for the great encounter? We have been waiting for you.”

It was her good friend Elizabeth coming toward her.

“Are you the only one in Bethlehem who hasn’t heard the good tidings?”

“Hannah, the God of Abraham, of Isaac and of Jacob has taken pity on His People! The Lord’s Angel appeared saying: ‘I bring you good tidings of great joy which will be to all people. For to you is born this day in the city of David a Savior, who is Christ the Lord.’ The promises are being fulfilled!”

“Really? The Hope of the nations has finally come down to earth?”

“Yes! And we can go see Him and pay Him homage! Come! It’s high time we left!”

The shepherds hastily set out on their way, with neither map nor guide – led only by their faith in the Angel’s words and their ardent longing to meet the Messiah. The caravan walked and walked, amid “glorias” and “alleluias,” until they finally spotted a very luminous cave on a hilltop nearby. “That must be where He lies!” they all concluded.

At that moment, Hannah’s lost sheep came to her mind. She recalled a passage from the Book of Isaiah: “All we like sheep have gone astray.” And she pondered in her heart: “We really are like stray sheep, even more than poor Bethy. But God did not abandon us, for the Saviour has come to…”

“That cry sounds awfully familiar… I think is Bethel!” Hannah scanned the knolls and gullies and soon sighted a figure prancing uphill toward the grotto. Full of new hope, she bolted after it, but a man suddenly came into view, picked the animal up, and slipped again into the shadows of night.

“Oh, no! I am positive that sheep was Bethel. She is of my flock!” cried the shepherdess.

Seeing what was happening, her father, Simon, called after her:

“Hannah! Don’t let this distract you from the great Messiah! We must be ready to give up good things to gain great ones! God will reward you for sacrificing your beloved sheep. The Messiah is waiting for us!”

When they reached the doorway of that place – steeped in such a blessing as to seem more like a cathedral than a cave – the pious shepherd folk clustered into a closer group, filled with awe and respect.

“Do you suppose we’ll be allowed to see Him?” whispered one of the shepherds.

“Wait and see,” responded another.

Just then a man emerged from the grotto and approached them. He was noble and distinguished – a true son of his forefather David. He addressed them in a tone of paternal affection, saying:

“Good people, we have been looking forward to your arrival! My Wife, Mary, is asking you to come in. Would you like to enter now?”

Wonderstruck and dazzled, the shepherds filed into the grotto.

Hannah glanced about one last time before entering, still hoping to find Bethel.

“My child, do you want to see little Jesus?” asked the Holy Patriarch.

That majestic voice, brimming with fatherly tenderness was music to Hannah’s ears and seemed to invite her to calmly confide.

No palace, nor even the Temple of Jerusalem could compare with the splendour of that grotto’s cold stones. Whoever entered there became immersed in an atmosphere of rapt joy and sublime quietude flowing from one of the greatest mysteries of our Faith, the Incarnation of Jesus Christ.

In the centre of the grotto sat a Lady all enveloped in serenity, the Blessed Virgin Mary, overjoyed to bear in her arms the One who was both her God and her Baby Boy. The shepherds all knelt around the Child’s Mother – all except Hannah, who had entered last.

Our Lady looked at the shepherdess, and then beckoned to her. Taking Hannah’s hand She bid her touch the sleeping Baby, and He opened His little eyes. Seeing the girl before him, He smiled. Then extended his tiny hand, to point to something at His side.

It was Bethel! Hannah’s strayed sheep had ended up right beside the loving Mother and Child, set there by the kind Patriarch, St. Joseph.

In this story, our little shepherdess finds her lost sheep. In reality, however, Hannah and all of humanity have gone astray by sin. We are the true lost sheep, found and rescued by the divine Good Shepherd, who took on our weak human nature to save us. ◊