Captivated by the exquisite textiles, Rebecca began to imagine the admiration they would win for her. She removed the crystal pendant and handed it to the woman without imagining the tragedy about to befall her.

Long ago, in a small German village, lived a poor farmwoman named Annamarie. The birth of her first daughter gladdened her immensely, but her joy was soon tinged by sadness, for the baby was found to be blind.

Afflicted, the good mother fervently implored Our Lady’s intercession, and a stunning miracle took place at the child’s Baptism: she gained vision in both eyes! At the same moment, a sparkling crystal pendant appeared hanging from her neck. All understood it to be a symbol of the miraculous gift that Heaven had bestowed upon tiny Rebecca.

The years passed. Annamarie had always taken a heavy part in managing the farm, but little by little her health was failing. Rebecca, in the meantime, learned to sew and embroider so well that she was able to sell her wares and help the family to make ends meet.

One day, Annamarie was so ill that she could not accompany her daughter into town to sell her embroidery work; Rebecca would have to go alone.

“Do be careful, my daughter,” Annamarie bid, “And remember: if you run into any difficulty, turn at once to Our Lady. She will always be by your side!”

After tracing a little cross on her daughter’s forehead as she always did, Annamarie sent her along with a group of good villagers bound for the same destination.

Arriving in town, Rebeca noticed with satisfaction that the marketplace was abuzz with commerce. Attracted by the hustle and bustle, she began wander among the stalls, curious to view what they displayed. There was everything for sale from the simplest sweets to the finest jewellery. Stopping at one booth where a shrewd-looking woman was selling a variety of exquisite fabrics, Rebecca asked her where they came from. The woman replied:

“I see you have an eye for quality textiles. What’s your name, girl?”

“Oh, lovely name…Where is your mother? You are so young to be walking about the city alone.”

“My mother couldn’t come with me, ma’am, but she knows that I am quite grown-up enough to look after myself. I came to sell my embroidery. Would you like to see some samples?”

The woman smiled craftily as she nodded. After eyeing Rebeca’s painstaking work, she said:

“Hmm… I see you have talent. But you can keep your goods and sell them to someone else. I am going to make you a different offer. Choose two cuts of fabric and I won’t charge you anything; but give me the crystal pendant you wear around your neck in exchange.

Seeing that Rebecca hesitated and grew a little pensive, the woman continued:

“Your necklace is not very valuable, but my fabrics certainly are. You will be able to make beautiful garments with them – to sell, or even to wear yourself. You will not regret the exchange at all… Quite the contrary…”

Intrigued by the offer, and already beginning to imagine the recognition and praise she would receive from all sides for acquiring such beautiful fabric, Rebecca thought:

“She’s right. It’s so little to lose, and I will gain so much. How silly I am! However did I come to be so attached to of a piece of glass?”

But she still wavered a little:

“Mother always told me that I was born blind and that I have my eyesight because of this pendant, but is that really true? It could just be a story she told me so that I would be careful not to lose it… Besides, now that I am older, I don’t need to wear this anymore. It would really be best to sell it. Goodbye, crystal!” 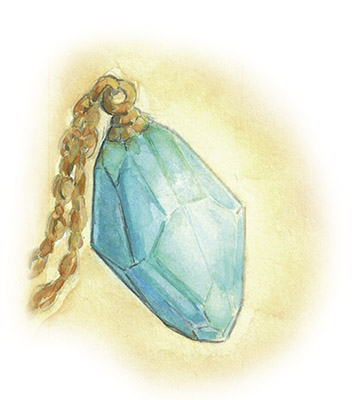 The girl removed the necklace from her neck with trembling fingers and handed it to the woman. As she walked away, thrilled with the attractive fabrics she had chosen, she felt a burning sensation in her eyes. But she paid it no heed; it was certainly caused by her wearisome trip…

The next morning, Rebecca slowly realized that her vision was blurry and dim. Then it began to dawn on her what she had done, and she faced a true nightmare:

“What have I done? I’m going blind! I must get my crystal pendant back!”

With difficulty, she made her way to the fabric vendor’s stand to return the fabric and ask for the necklace back. But the woman replied, with a sneer:

“I don’t give refunds, little girl! I sold that necklace of yours to a countess passing through the city. If you want it back, you’ll have to go after her and try to catch up with her caravan.”

Distraught, Rebecca set out, groping and stumbling, in search of the countess who had her precious crystal. Managing to find out which caravans had visited the city the day before, she soon discovered where the countess was headed and pursued her caravan by the path indicated.

The journey was an ordeal; she was exhausted when she came upon some spice merchants. When she asked about the countess’ caravan, they replied:

“Yes, we know that noblewoman well. Her castle is about a day’s journey from here. But why are you looking for her?”

Rebeca told them her whole story, and the eldest declared:

“I know exactly the necklace you mean. The countess decided to send it as a gift to a Princess of Ethiopia in thanks for allowing her to trade spices in her realm. The ship to those lands sets sail today. If you wish, I can take you to the port; it’s not far from here.”

Arriving, they found a crowd gathered at the port, conversing in a state of utter shock. The ship Rebecca sought had departed early, but had wrecked while still in sight and now rested at the bottom of the sea. Passengers and crew had finally made it ashore in lifeboats, but all the cargo was lost!

Turning to Rebeca, the merchant said: “Well, little girl, I did what I could. I’m sorry I couldn’t help you get your necklace back. But now I must go and notify the countess of what has happened.”

Rebecca was stunned. Now she realized that she would never be able to rescue her precious crystal. She was blind forever! Bursting into tears, she fell to her knees on the sand which – alas! – she no longer saw.

She begged for mercy, pleaded for pardon and asked Our Lady to cure at least the vanity and greed that were the cause of her blindness. Then, one of her tears fell directly upon the sand and was instantly transformed into a beautiful lilac-coloured crystal! Hearing the soft sound it made as it hit the sand, Rebecca opened her eyes. She could see again!

Dear reader, we also received a crystal of innocence on the day of our Baptism, as a gift of priceless value. If, fascinated by worldly pleasures, we one day lose it, our eyes will close to God like Rebecca’s. But, even if this disgrace befalls us, let us never be discouraged: sincere contrition for our sins and confident recourse to Our Lady can restore everything! ◊

A Bird from Paradise

“A pair of turtledoves, or two young pigeons…”