The Memoirs of a Grain of Wheat

This was the way I saw things in the past. But now, as I recount my life, I am aware that I was called to an infinitely higher mission! 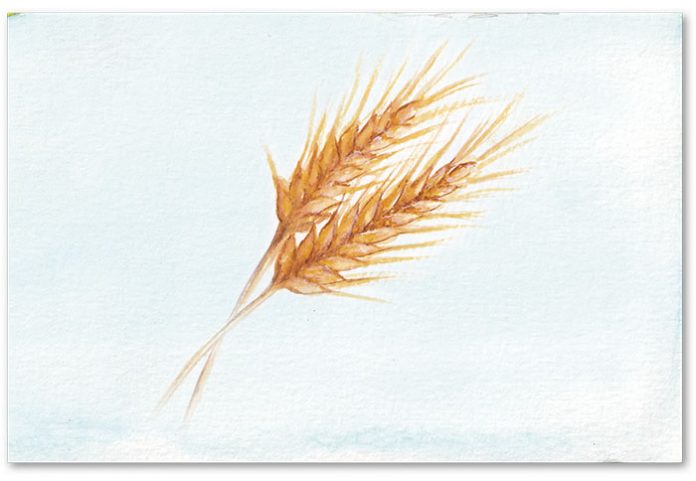 Dear friends, let me tell you the story of my life. My name is wheat, just like all the other countless members of my family.

It all started when I was a tiny seed: the sower lovingly planted me in an immense field and began to observe my growth. My first memories are of the kind labourer who took excellent care of me and my seed siblings.

But, believe me: our development was not easy! There were times when we nearly drowned in torrential rains; and a terrible drought almost scorched us for good, on another occasion. Yet, through all these ordeals, our watchful farmer was there with us, sparing no effort to save us.

Time passed, and a much worse trial came upon us: we discovered that there were intruders among us. Yes, intruders! They were the dreaded tare weeds, who wanted to hinder our mission. One day, one of the tare spikes said to us threateningly:

“You wheatlings will never become food! We tares have taken over this field, and we will ruin the crop!”

“You are wrong! the good farmer will not allow such a thing; he will see who you are and put an end to your wicked plans.”

“Ha, ha, ha! How ignorant!” retorted the invader. “Can’t you see how identical we are? He won’t even notice us hiding among you.”

I could not understand this desire for destruction. So I asked:

“What is it that makes you so hostile?”

And I was horrified at his reply:

“Because we tares are envious of the love you receive from the farmer, and we despise him for giving it! That is why we will keep you from becoming fully-grown and good for food.”

I didn’t know what to say. How could the farmer’s care for us stir up such hatred?

But it was during this conversation that I learned that our crop was destined for human consumption. How wonderful! This is what we were called to do: to nourish. However, I need to clarify, my dear friends, that my view was somewhat limited in the past. Now, as I now recount my life, I am aware that I am called to carry out this mission in an infinitely higher way!

We were anxious for the farmer to notice the enemy invasion of the field. We prayed to Our Lady, begging for her unfailing help in that difficult situation. Whenever he visited us, he seemed not to perceive the presence of the tares. And so we continued to grow as best we could, feeling constantly crowded out by those traitors in our midst. Finally, harvest time came.

On the appointed day, it was not the farmer who appeared, but one of his workers. This man was to be our reaper… Many of us wept, thinking that he might not be able to tell us apart from the tares. Yet, something inside me inspired words of confidence and peace: “The farmer will save us!” Comforted by this idea, I tried to hearten the others with that certainty. Thanks to the intercession of Holy Mary, all the plants took heart, and started bolstering each other’s hopes. Then, with a stroke of the scythe, we were cut off close to the earth.

We were gathered, wheat and tares alike, and carried to another place. There we found the good farmer waiting for us! How glad we were to see the one on whom our salvation depended! And, to our great joy, he separated us from our enemies! They were cast into the fire, seething with rage at the ruin of their plans.

As for us, we were tied into sheaves and sent to another site. That was the last time we saw our sower and farmer. Though it pained us to leave him, we were content to know that his hopes for us had been crowned with success, and we were setting out to fulfil our purpose.

They took us to a place where we had a lot to suffer. I thought the worst of our existence was over with reaping, but no: it was only beginning! Strangers now threshed us and milled us into flour. My goodness, how painful that was! Then we were mixed with water, which transformed us into a snow-white batter.

We were poured into a large and strange-looking machine, where we were pressed between extremely hot plates until forming a series of smooth disks.

We spent an entire night stacked up, wondering what would become of us. The next morning, the same people who had operated yesterday’s machine took us to another piece of equipment, which steamed us thoroughly.

In the midst of that ordeal, with no explanation as to the reason behind this process, all we did was pray continuously to God.

After many long hours, we were quite damp. They then took us to a third machine that cut us into smaller circles. It was all such a distressing procedure!

Finally, once we were dry and firm again, they stored us in a sealed container. None of us knew what was happening. Only one fact consoled us: we were still all together, more united than ever… Or, you could even say, we were one!

Before we knew it… we had become bread! But a different sort of bread, very different from the common bread found in bakeries.

We spent a few days in great anticipation. What was going to happen to us? I tell you, my friends, the pain of waiting is also an ordeal! Finally, a mysterious hand removed us from the container: it was a friar who was preparing everything that would be needed for Holy Mass!

It is at this very moment that I am writing you the story of my life. We are hosts destined for the Consecration! This is why we were sown. What an emotional moment! I can barely hold back my tears… Goodbye, friends!

Here the words of our pious grain of wheat end, and a different script, written in gold letters, carries on where he left off:

I am the Angel who watched over the wheat field and accompanied the development of this grain of wheat, whose story I wish to conclude.

When the priest said the words of Consecration, the wheat ceased to exist, leaving only its appearance. Still looking like the bread of the host, it became the Body, Blood, Soul and Divinity of Our Lord Jesus Christ. I continually protected those grains, so that they could one day be part of this sublime miracle of the Eucharist.

Just think, dear reader: something very much like this happens in human life. You may undergo countless difficulties and struggles, but always trust in the Lord God who created you, and in Our Mother of Mercy. They have lofty plans for you. You are called to heroic holiness; therefore, never be discouraged, for a great reward lies in store for you, if you persevere until the end. ◊

Where Will I Live?

The Lioness’ Loss and the Tortoise’s Triumph

The Throne of the King of Kings

Blessed Are the Stars that Saw You...