Home Story for Children Where Will I Live?

Standing sorrowfully before the statue of the Sacred Heart of Jesus, Manuel unburdened his soul. Nothing in his life had ever worked out… Burying his face in his hands, he wept bitterly, until he felt a hand touch his shoulder.

Once upon a time there lived a poor and simple man called Manuel. He wandered about restlessly, looking forlorn. Why was he so troubled? The poor fellow had nowhere to live, and he longed for a place to call his home.

The big problem was his lack of means, for there wasn’t a penny in his ragged and threadbare pocket. If he wanted a solution, he would need to find some kind of work. And that is what he decided to do.

Making his way through the streets, he stopped in front of a splendid mansion and thought: “With such a big place, they may need some help with the upkeep.”

“Who is it?” asked the doorman.

“I would like to work at this house,” Manuel replied.

“Hmm… Wait here while I call the housekeeper.”

After a few minutes, an impeccably-dressed lady appeared. She looked curiously at Manuel, anxious to know what he wanted.

He told her of his dire necessity, and she replied kindly:

“I understand what a difficult situation you are in. We are already fully-staffed, but I will accept your services as long as the butler can assign you some task.”

The lady invited him in and introduced him to the butler. The latter, however, accustomed to being treated with the highest respect, could not bear to see such a shabby fellow being treated so politely. Disguising his malice, he replied:

“Ma’am, it happens that all our posts are filled. However, I know of a very good household that is in need of help.”

He jotted down an address on a piece of paper and handed it to the visitor. The housekeeper, visibly relieved, wished Manuel good luck and let him continue on his way. The information on the paper, however, was false; it led him out of town, down a long, deserted street with nothing but overgrown plots of land… Manuel understood the butler’s trick and decided not to return to the mansion.

As he walked along, he came upon a horse stable, with a “Help Needed” sign hanging out on the front gate.  Manuel presented himself and was accepted. His duty would be to clean the horses’ stalls, feed them, and watch over them during their daily exercise. There was a small hut close to the stable, which would serve as his living quarters.

Early the next morning, he started his cleaning duty, and he seemed to be doing a fine job. However, when he released the horses, they all fled as if in a stampede. The front gate of the horse farm had been left open and most of them charged through it. It took seven hours of tremendous effort to retrieve the horses and gather them back into the stable. The owner, furious, fired Manuel without paying him a single cent.

He arrived at the shop of a sucessful artist who painted exquisite landscapes to order. Since he had many clients, he worked every day until late at night, and he needed someone to act as a general helping hand and to deliver the finished goods to his buyers.

The poor man offered his services, and the artist gladly accepted, giving his assistant a place to stay under his own roof, and welcoming him at his own table. Manuel was to be at hand at all times to render any necessary service.

However, by the end of the first month, customer complaints had become incessant: the paintings they had received were not the ones they had ordered. Tired by the long hours, Manuel had mixed up the most of the deliveries, causing a terrible confusion.

The painter felt sorry for the unfortunate man, but knowing he could not afford to place his business at risk, he told Manuel that he would have to go.

This time, Manuel decided to implore heavenly assistance. He was truly a humble man and had hope in divine intervention. As he walked and prayed, he came upon a monastery. An idea occurred to him: “Why don’t I become a monk?”

He knocked on the door, and was soon telling the abbot all his woes. The good monk felt compassion for Manuel. He could not accept someone without a clear vocation, but to help him, he agreed to let him stay at the monastery for a while. 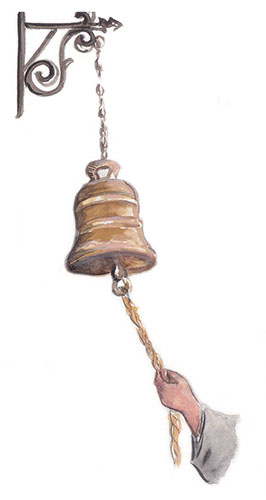 He asked one of the friars to instruct him on the daily life of the community. But Manuel was unable to adapt to the silence, the schedule, or the monastic discipline. He spoke even during the most sacred moments of recollection. One day, fascinated by the bells, he began to pull the cord that set the carillon in motion, bringing all the monks running…

After this and similar escapades, the abbot had no choice but to send him away from the monastery. Before the unfortunate man left, he gave him a blessing, which Manuel received amid sobs, and said to him in a fatherly tone:

“My son, go to the church and pray before the Sacred Heart of Jesus. I am sure that He will help you!”

Manuel took his advice, and standing before the statue, he unburdened his soul:

“My good Saviour, see how miserable I am! I’m not fit for anything at all. I only make terrible mistakes everywhere I go, and that’s why everyone rejects me. I have no home, no means to live. Will You abandon me too? Please help me, Lord; I have nowhere else to turn.”

Burying his face in his hands, Manuel wept bitterly. After a long time, he felt a hand touch his shoulder and he looked up at the statue; it had come to life!

Overflowing with goodness, Jesus said to him:

“Manuel, my child, dry your tears. All of this happened so that I could grant you an immense grace. Do you see my right hand? It calls you. Now look at my left hand: it points to my Heart. The anguish you have suffered and the trust you have placed in Me have moved my love to grant you a place in this divine sanctuary. Do you want to live here always?”

“Yes, Lord! It will be my home forever!”

And, extending His right hand, the Divine Saviour took Manuel and placed him inside his Sacred Heart.

God allows us to experience tribulations, but always with a view to a greater good. Let us never stop trusting in the goodness of Jesus! In the end we will receive much more than we may have lost. ◊

The Lamb, the Pigs and the Mud