The Minor Basilica of San Lorenzo Mártir, in Santa Cruz de la Sierra, Bolivia, was the target of vandalism by a group of feminists last October, during the Sunday Mass celebrated by Metropolitan Archbishop Sergio Alfredo Gualberti Calandrina. The attack was in protest to Catholic anti-abortion morality. The aggressors painted graffiti and pasted signs on the walls of the church, but were surprised by a group of indigenous women who, seized with zeal for the God’s house, drove them out with lashes.

When questioned by the local press about their actions, one of the indigenous women declared: “Since nobody reacted, we ran and got our whips to defend the church, because of what was happening here.” Another indigenous woman, showing her whip added: “We are going to do the same with anyone who comes here with the intention of showing disrespect or committing evil acts.”

Ukrainian cathedral to be returned to the Catholic Church 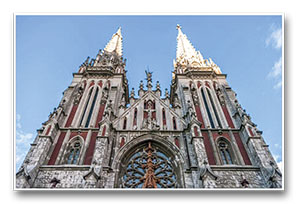 Next June, St. Nicholas Cathedral in Kiev will return to the Catholic Church’s rightful ownership. More than ninety years ago, the communist regime suppressed worship in what was the country’s main church and confiscated it, turning it into a warehouse. During the Second World War, the cathedral suffered several attacks. Having been restored after the conflict, it housed the Kiev Region Archives and was used as a concert hall.

In a statement published on the religious website risu.ua, the Church in Ukraine states that “thanks to the efforts of many believers, historical justice will be restored and the Christian shrine will return to the bosom of the Church.”

The book The Winegrowers of Heaven by Marc Paitier was launched in France. The work deals with the symbolism of wine and vineyards in Sacred Scripture, and gives a description of the history of monastic viticulture and the primordial role of monks in the building of Christian Civilization.

The beautiful promotional video of the work presents the current labours of the Benedictines of Barroux Abbey, with the following text: “After the fall of the Roman Empire, the monks became the architects of a new world. Their work as builders drew on the sacred sources of the Bible. The vines which flourished around the monasteries are the living expression of this civilization. It graces the landscape of rural France: its history, its customs, its culture. Having disappeared two hundred years ago, it is flourishing today.” 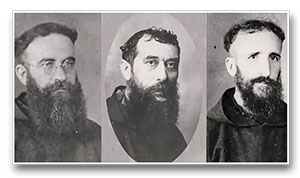 On November 6, the Prefect of the Congregation for the Causes of Saints, Cardinal Marcello Semeraro, presided at the beatification ceremony of three Capuchin religious, martyred in 1936 during the Spanish Civil War. The Apostolic Nuncio to Spain, Archbishop Bernardito Cleopas Auza, and bishops from several nearby dioceses concelebrated the solemn Eucharist held in the Cathedral of Manresa, Catalonia.

Between 1936 and 1939 many Capuchins were murdered out of hatred for the Faith in Catalonia. Twenty-six have already been beatified, and they were joined by Friar Benito de Santa Coloma, Friar Domingo de Sant Pere de Riudebitlles and Friar José Oriol de Barcelona.

The Cathedral of Our Lady of Arabia inaugurated

In Bahrain, a small country on the Persian Gulf, the Cathedral of Our Lady of Arabia was officially inaugurated by King Hamad bin Isa Al Khalifa. The event took place on December 9, and the dedication ceremony of the church was held the following day, presided over by Cardinal Luis Antonio Gokim Tagle, Prefect of the Congregation for the Evangelization of Peoples.

The building, with a seating capacity of 2,300, was built on land donated by the monarch in Awali, a small township in the centre of the country. It is the largest Catholic place of worship in the region and is intended to become a point of reference for the faithful of all northern Arabia, especially Saudi Arabia, where the practice of any religion other than Islam is forbidden.

Our Lady of the Pillar embarks on Spanish submarine

In the presence of a delegation headed by Vice Admiral Pedro Luis de la Puente García-Ganges, Chief Admiral of the Arsenal of Cartagena, a statue of Our Lady of the Pillar was blessed in her basilica in Zaragoza, to accompany the crew of the modern submarine Isaac Peral, of the Spanish Navy. After the blessing, the statue was consigned to the Commanding Officer of the vessel, Corvette Captain Manuel Corral, a native of the Aragonese capital.

The Virgin of the Pillar has been the Patroness of the Spanish Navy’s Submarine Fleet since 1946. Her patronage dates back to the year 1889, when the officer Isaac Peral took the first dive in his submarine and entrusted himself to Her, beseeching protection for himself and the entire crew.

Cathedral hit by gunfire in Myanmar

The Sacred Heart of Jesus Cathedral in Pekhon, Myanmar, was hit by heavy gunfire from the national army on the night of November 10, according to information from Fr. Julio Oo, a diocesan priest.

This Southeast Asian country obtained its independence from the United Kingdom in 1948, and since then has been the stage of frequent conflicts. As the priest explained, the church serves as a place of refuge and protection for hundreds of people when fighting breaks out in the midst of the violent civil war – considered the longest in the world – that ravages Myanmar.

After several weeks of eruption, the Cumbre Vieja volcano in La Palma, in the Canary Islands, showed  little sign of rest. Wherever the lava flowed, it has transformed immense green areas into grey, smoking earth. However, amidst all the desolation, there remains what has become a focal point of hope for the island’s inhabitants: a monument dedicated to Our Lady of Fatima, situated about five hundred metres from the mouths of the volcano, which has been respected by the destructive lava flow and earthquakes and remains intact amidst the ashes.

The history of the monument is closely related to volcanic eruptions, and is the fruit of a promise. In 1949, the San Juan volcano erupted, spreading its destructive lava over the eastern side of the island, towards the hermitage of San Nicolas of Bari, a site of not only religious but also artistic and historic importance. The then parish priest of Las Manchas, Fr. Blas Santos Pérez, promised Our Lady of Fatima that he would build a monument in her honour if She saved the chapel from the fire. In the following days the lava flow shifted course and, some time later, the monument was erected.

The Marian statue remains standing today, spared by the devastation of the Cumbre Vieja volcano, as a reminder of her promise that after all the catastrophes she prophesied in Fatima, her Immaculate Heart will triumph.