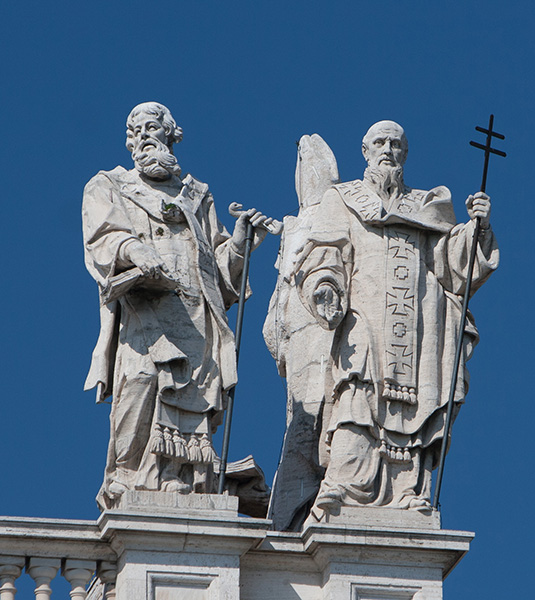 Memorial of St. Basil the Great and St. Gregory Nazianzen

St. Basil the Great (†379) and St. Gregory Nazianzen (†389), bishops and Doctors of the Church. St. Basil founded many monasteries and became Bishop of Caesarea. He was outstanding in his fight against the Arian heresy. St. Gregory, who ardently defended the divinity of the Incarnate Word, was made Bishop of Constantinople and later returned to his native Nazianzus. Sts. Basil and Gregory, both eminent theologians, were acquainted in 532 and became close friends, motivated as they were by the same spiritual goals.

St. Telesphorus, Pope and martyr (†c. 136). Of Greek origin, he suceeded Pope Sixtus I and was martyred during the time of Emperor Hadrian.

St. Theodore, Bishop (†594). He was persecuted by Kings Childebert and Gontran. He died in Marseille, France.

St. John the Good, bishop (†c. 660). He re-established the Episcopal See in the city of Milan that had been transferred to Genoa due to the Lombard threat.

St. Adelard, abbot (†826). As superior of the monastery of Corbie in France, he ensured that everyone’s needs were met by avoiding both excess and penury; and that all ware diligent in praising God.

Blesseds Guillaume Repin and Lawrence Batard, priests and martyrs (+1794). Beheaded during the Frech Revolution for their fidelity to the Church.

Blessed Stephanie Quinzani, virgin (†1530). Dominican Tertiary born in Brescia, Italy. She dedicated herself to the contemplation of the Passion of Our Lord and the Christian formation of girls.

Blessed Marie-Anne Soureau-Blondin, virgin (†1890). Foundress of the Congregation of the Sisters of St. Anne in Quebec, Canada, dedicated to the education of poor country children.

St. Basil the Great and St. Gregory of Nazianzus
1 of 6

Let what you heard from the beginning remain in you. If what you heard from the beginning remains in you, then you will remain in the Son and in the Father. And this is the promise that he made us: eternal life. I write you these things about those who would deceive you. As for you, the anointing that you received from Him remains in you, so that you do not need anyone to teach you. But his anointing teaches you about everything and is true and not false; just as it taught you, remain in him.

And now, children, remain in Him, so that when He appears we may have confidence and not be put to shame by him at his coming.

R. All the ends of the earth have seen the saving power of God.

Sing to the LORD a new song,
for He has done wondrous deeds;
His right hand has won victory for Him,
his holy arm. R.

The LORD has made his salvation known:
in the sight of the nations He has revealed his justice.
He has remembered his kindness and his faithfulness
toward the house of Israel. R.

All the ends of the earth have seen
the salvation by our God.
Sing joyfully to the LORD, all you lands;
break into song; sing praise. R.

This is the testimony of John.
When the Jews from Jerusalem sent priests and Levites to him
to ask him, “Who are you?”
He admitted and did not deny it, but admitted,
“I am not the Christ.”
So they asked him,
“What are you then? Are you Elijah?”
And he said, “I am not.”
“Are you the Prophet?”
He answered, “No.”
So they said to him,
“Who are you, so we can give an answer to those who sent us?
What do you have to say for yourself?”
He said:
“I am the voice of one crying out in the desert,
‘Make straight the way of the Lord,’
as Isaiah the prophet said.”
Some Pharisees were also sent.
They asked him,
“Why then do you baptize
if you are not the Christ or Elijah or the Prophet?”
John answered them,
“I baptize with water;
but there is one among you whom you do not recognize,
the one who is coming after me,
whose sandal strap I am not worthy to untie.”
This happened in Bethany across the Jordan,
where John was baptizing.