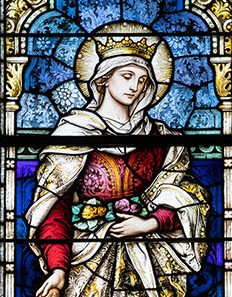 Memorial of St. Elizabeth of Hungary

St. Elizabeth of Hungary, religious (†1231). Daughter of the King of Hungary, she was married to Louis IV of Thuringia with whom she had three children. After the death of her husband, she made a vow of celibacy and left her castle to lead a life of extraordinary charity taking the habit of the third order of St. Francis. She died at the age of 24 in the Hospital of Marburg which she built, and where she dedicated herself to caring for the sick.

St. Hugh of Lincoln, abbot and bishop (†1200). Of Burgundian nobility, he became a Benedictine in his youth, and then a Carthusian, entering the Grande Chartreuse. He was sent in 1179 to become the prior of the first Carthusian house in England, Witham Charterhouse. Under obedience, he accepted  appointment as the Bishop of Lincoln, which see flourished under his wise and just direction.

St. Hilda of Whitby, abbess (†680). A princess of Northumland who was baptized by St. Paulinus and, under the guidance of St. Aiden,  became the abbess of the monsastery of Hartpool, and later of Whitby Abbey, an important religious centre where the decisive Synod of Whitby was held.

St. Lazarus of Constantinople, monk (†circa 867). Born in Armenia, he became a monk in Constantinople. Accomplished painter of sacred images.

Blessed Josaphat Kocylovskyj, bishop and martyr (†1947). Basilian religious elected Bishop of
Przemyśl, Poland. He died in a concentration camp on the outskirts of Kiev.

Blessed Salomea of Krakow, abbess (†1268). Polish noblewoman married to the king of Hungary. After the death of her spouse, she became a Poor Clare.

St. Elizabeth of Hungary
1 of 7

Beloved:
We know that we have passed from death to life
because we love our brothers.
Whoever does not love remains in death.
Everyone who hates his brother is a murderer,
and you know that anyone who is a murderer
does not have eternal life remaining in him.
The way we came to know love
was that he laid down his life for us;
so we ought to lay down our lives for our brothers.
If someone who has worldly means
sees a brother in need and refuses him compassion,
how can the love of God remain in him?
Children, let us love not in word or speech
but in deed and truth.

R. I will bless the Lord at all times.
or:
R. Taste and see the goodness of the Lord.

I will bless the LORD at all times;
his praise shall be ever in my mouth.
Let my soul glory in the LORD;
the lowly will hear and be glad. R.

Glorify the LORD with me,
let us together extol his name.
I sought the LORD, and he answered me
and delivered me from all my fears. R.

Look to him that you may be radiant with joy,
and your faces may not blush with shame.
When the poor one called out, the LORD heard,
and from all his distress he saved him. R.

The angel of the LORD encamps
around those who fear him, and delivers them.
Taste and see how good the LORD is;
blessed the man who takes refuge in him. R.

Fear the LORD, you his holy ones,
for nought is lacking to those who fear him.
The great grow poor and hungry;
but those who seek the LORD want for no good thing. R.

Jesus said to his disciples:
“To you who hear I say,
love your enemies, do good to those who hate you,
bless those who curse you, pray for those who mistreat you.
To the person who strikes you on one cheek,
offer the other one as well,
and from the person who takes your cloak,
do not withhold even your tunic.
Give to everyone who asks of you,
and from the one who takes what is yours do not demand it back.
Do to others as you would have them do to you.
For if you love those who love you,
what credit is that to you?
Even sinners love those who love them.
And if you do good to those who do good to you,
what credit is that to you?
Even sinners do the same.
If you lend money to those from whom you expect repayment,
what credit is that to you?
Even sinners lend to sinners,
and get back the same amount.
But rather, love your enemies and do good to them,
and lend expecting nothing back;
then your reward will be great
and you will be children of the Most High,
for he himself is kind to the ungrateful and the wicked.
Be merciful, just as also your Father is merciful.