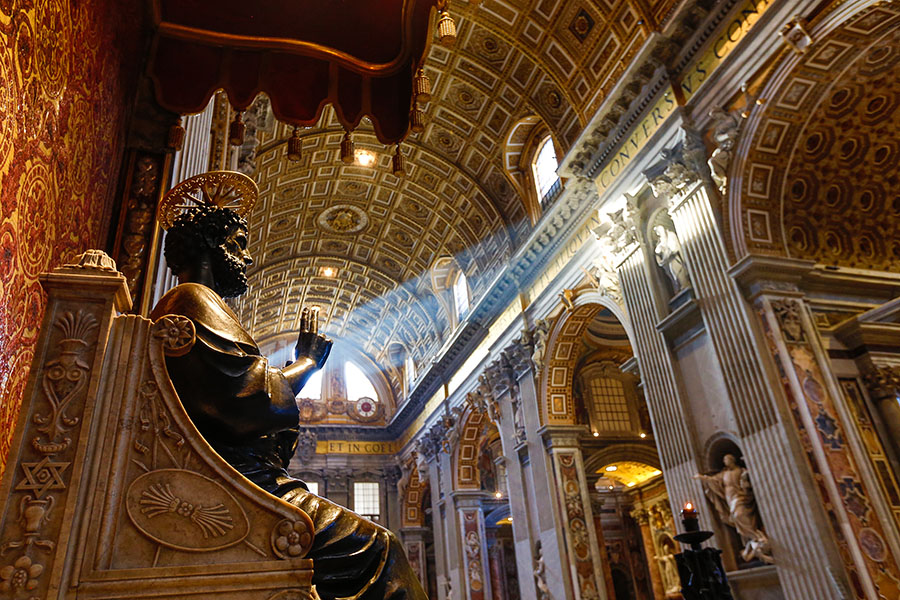 Thursday of the 33rd Week in Ordinary Time

Dedication of the Basilica of Sts. Peter and Paul, Apostles. Optional memorial. The former was built by Constantine on Vatican Hill, over St. Peter’s sepulchre, and the latter was erected on the Via Ostiensis, over the tomb of St. Paul. the dedication of these two basilicas was added to the Roman Calendar by St. Pius V in 1568.

St. Odo of Cluny, abade (†942). abbot (†942). Second Abbot of Cluny; he restored monastic discipline in many monasteries of France and Italy.

St. Rose Philippine Duchesne, virgin (†1852). Optional Memorial in USA. Born in Grenoble, France,  she entered a monastery there in 1788, but the Reign of Terror dispersed its members in 1792. After many years of struggles, she became a disciple of St. Madeleine-Sophie Barat, foundress of the new Society of the Sacred Heart, dedicated to teaching. Under her direction, St. Rose emigrated to the United States as a missionary, and opened several schools there. She died in St. Charles, Missouri at the age of 83.

St. Romanus, martyr (†303). Deacon of Caesarea, who exhorted the Christians of Antioch to persevere in the Catholic Faith when he saw them approaching idols; for this he was tortured and strangled to death.

Blessed Grimoald of the Purification Santamaria, religious (†1902). Passionist brother who became mortally ill while preparing for priestly ordination. He died a holy death at 18 years of age in Ceccano, Italy.

Blessed­ Carolina­ Kózka, virgin and martyr (†1914). Catechist from the parish of Zabawa, Poland. She
died at 16 years of age, during the First World War, resisting a Russian soldier who attempted to violate her chastity.

The officers of the king in charge of enforcing the apostasy
came to the city of Modein to organize the sacrifices.
Many of Israel joined them,
but Mattathias and his sons gathered in a group apart.
Then the officers of the king addressed Mattathias:
“You are a leader, an honorable and great man in this city,
supported by sons and kin.
Come now, be the first to obey the king’s command,
as all the Gentiles and the men of Judah
and those who are left in Jerusalem have done.
Then you and your sons shall be numbered among the King’s Friends,
and shall be enriched with silver and gold and many gifts.”
But Mattathias answered in a loud voice:
“Although all the Gentiles in the king’s realm obey him,
so that each forsakes the religion of his fathers
and consents to the king’s orders,
yet I and my sons and my kin
will keep to the covenant of our fathers.
God forbid that we should forsake the law and the commandments.
We will not obey the words of the king
nor depart from our religion in the slightest degree.”

As he finished saying these words,
a certain Jew came forward in the sight of all
to offer sacrifice on the altar in Modein
according to the king’s order.
When Mattathias saw him, he was filled with zeal;
his heart was moved and his just fury was aroused;
he sprang forward and killed him upon the altar.
At the same time, he also killed the messenger of the king
who was forcing them to sacrifice,
and he tore down the altar.
Thus he showed his zeal for the law,
just as Phinehas did with Zimri, son of Salu.

Then Mattathias went through the city shouting,
“Let everyone who is zealous for the law
and who stands by the covenant follow after me!”
Thereupon he fled to the mountains with his sons,
leaving behind in the city all their possessions.
Many who sought to live according to righteousness and religious custom
went out into the desert to settle there.

R. To the upright I will show the saving power of God.
God the LORD has spoken and summoned the earth,
from the rising of the sun to its setting.
From Zion, perfect in beauty,
God shines forth. R.

“Gather my faithful ones before me,
those who have made a covenant with me by sacrifice.”
And the heavens proclaim his justice;
for God himself is the judge. R.

“Offer to God praise as your sacrifice
and fulfill your vows to the Most High;
Then call upon me in time of distress;
I will rescue you, and you shall glorify me.” R.

As Jesus drew near Jerusalem,
he saw the city and wept over it, saying,
“If this day you only knew what makes for peace–
but now it is hidden from your eyes.
For the days are coming upon you
when your enemies will raise a palisade against you;
they will encircle you and hem you in on all sides.
They will smash you to the ground and your children within you,
and they will not leave one stone upon another within you
because you did not recognize the time of your visitation.”