Friday of the 33rd Week in Ordinary Time 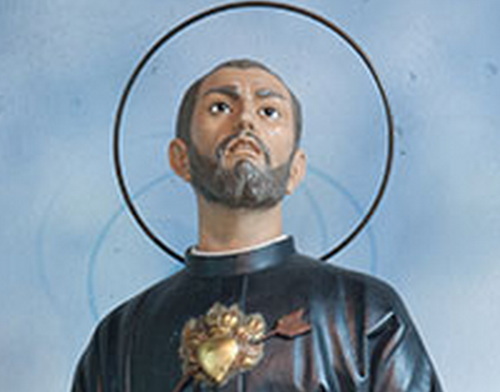 Sts. Roque González, Alphonse Rodríguez and John del Castillo, priests and martyrs (†1628). Memorial in several South American countries. Jesuit missionaries, martyred in the region of Rio de la Plata by some leaders of the native Guarani peoples they had  come to evangelize.

St. Obadiah, prophet. After the exile of the chosen people, he announced the wrath of God against the enemies of Israel.

St. Matilda (Mechtilde), virgin (†circa 1298). Benedictine nun who was the teacher of St. Gertrude in the Monastery of Helfta, Germany, who like her pupil was also favoured with mystical experiences and revelations.

Judas and his brothers said,
“Now that our enemies have been crushed,
let us go up to purify the sanctuary and rededicate it.”
So the whole army assembled, and went up to Mount Zion.

Early in the morning on the twenty-fifth day of the ninth month,
that is, the month of Chislev,
in the year one hundred and forty-eight,
they arose and offered sacrifice according to the law
on the new altar of burnt offerings that they had made.
On the anniversary of the day on which the Gentiles had defiled it,
on that very day it was reconsecrated
with songs, harps, flutes, and cymbals.
All the people prostrated themselves and adored and praised Heaven,
who had given them success.

For eight days they celebrated the dedication of the altar
and joyfully offered burnt offerings and sacrifices
of deliverance and praise.
They ornamented the facade of the temple with gold crowns and shields;
they repaired the gates and the priests’ chambers
and furnished them with doors.
There was great joy among the people
now that the disgrace of the Gentiles was removed.
Then Judas and his brothers and the entire congregation of Israel
decreed that the days of the dedication of the altar
should be observed with joy and gladness
on the anniversary every year for eight days,
from the twenty-fifth day of the month Chislev.

R. We praise your glorious name, O mighty God.
“Blessed may you be, O LORD,
God of Israel our father,
from eternity to eternity.” R.

“Yours, O LORD, are grandeur and power,
majesty, splendor, and glory.
For all in heaven and on earth is yours.” R.

“Yours, O LORD, is the sovereignty;
you are exalted as head over all.
Riches and honor are from you.” R.

“You have dominion over all,
In your hand are power and might;
it is yours to give grandeur and strength to all.” R.

Jesus entered the temple area and proceeded to drive out
those who were selling things, saying to them,
“It is written, My house shall be a house of prayer,
but you have made it a den of thieves.”
And every day he was teaching in the temple area.
The chief priests, the scribes, and the leaders of the people, meanwhile,
were seeking to put him to death,
but they could find no way to accomplish their purpose
because all the people were hanging on his words.