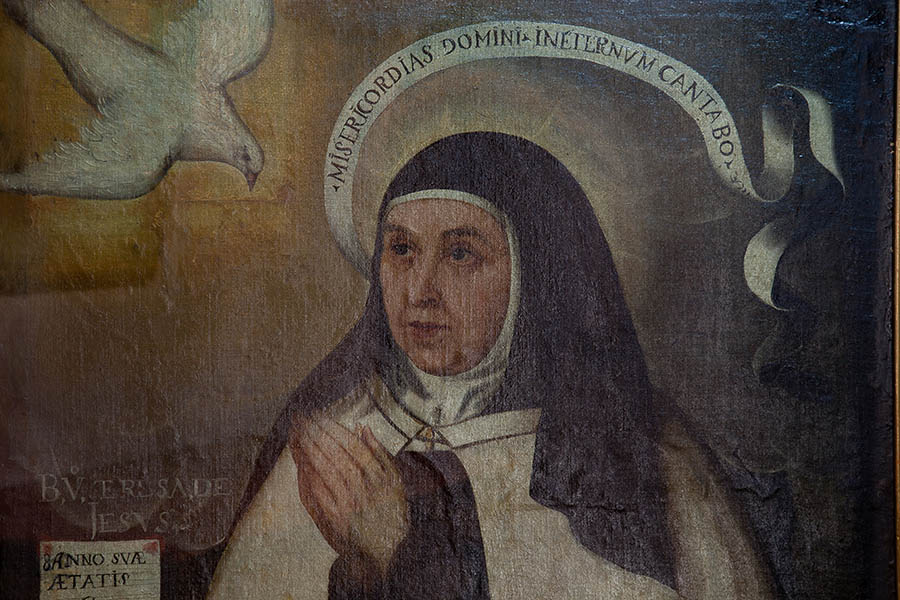 St. Teresa of Jesus, virgin and Doctor of the Church(†1582). She entered Carmel of Avila at twenty-four, encountering much laxness there.  At the age of forty,  she began the reform of the Order of Carmel with the help of St. John of the Cross. She wrote several books setting out her sublime doctrine and describing her mystical experiences. See also: The Reform of the Incarnation, and St. Teresa’s Kitchen

St. Barsen, bishop (†379). For his Catholic faith he was ccondemned to exile by the Arian Emperor Valente, after changing cities three times, he died in Edessa, Turkey.

St. Severus de of Trier, bishop (†fifth centutry). He accompanied St. Germanus of Auxerre in the fight against the Pelagian heresy in England and preached the Gospel in Germany. He died in Trier, Germany.

St. Magdalene of Nagasaki, virgin and martyr (†1634). Augustinian Recollect Tertiary, daughter of martyrs. She helped persecuted Christians until she was martyred in Nagasaki, Japan. She withstood the torture of being suspended upside-down in a pit for 13 days, constantly invoking the names of Jesus and Mary, before surrendering her soul to God.

Blessed Gonzalo of Lagos, priest (†1422). Portuguese priest, from the Order of Hermits of St. Augustine. Although a great theologian, he chose to dedicate himself to teaching children and persons of little learning.

Brothers and sisters: What can we say that Abraham found, our ancestor according to the flesh? Indeed, if Abraham was justified on the basis of his works, he has reason to boast; but this was not so in the sight of God. For what does the Scripture say? Abraham believed God, and it was credited to him as righteousness. A worker’s wage is credited not as a gift, but as something due. But when one does not work, yet believes in the one who justifies the ungodly, his faith is credited as righteousness. So also David declares the blessedness of the person to whom God credits righteousness apart from works: Blessed are they whose iniquities are forgiven and whose sins are covered. Blessed is the man whose sin the Lord does not record.

R. I turn to you, Lord, in time of trouble, and you fill me with the joy of salvation.

Blessed is he whose fault is taken away,
whose sin is covered.
Blessed the man to whom the LORD imputes not guilt,
in whose spirit there is no guile. R.

Then I acknowledged my sin to you,
my guilt I covered not.
I said, “I confess my faults to the LORD,”
and you took away the guilt of my sin. R.

Be glad in the LORD and rejoice, you just;
exult, all you upright of heart. R.

At that time:
So many people were crowding together
that they were trampling one another underfoot.
Jesus began to speak, first to his disciples,
“Beware of the leaven–that is, the hypocrisy–of the Pharisees.

“There is nothing concealed that will not be revealed,
nor secret that will not be known.
Therefore whatever you have said in the darkness
will be heard in the light,
and what you have whispered behind closed doors
will be proclaimed on the housetops.
I tell you, my friends,
do not be afraid of those who kill the body
but after that can do no more.
I shall show you whom to fear.
Be afraid of the one who after killing
has the power to cast into Gehenna;
yes, I tell you, be afraid of that one.
Are not five sparrows sold for two small coins?
Yet not one of them has escaped the notice of God.
Even the hairs of your head have all been counted.
Do not be afraid.
You are worth more than many sparrows.”