Saturday of the 28th Week in Ordinary Time 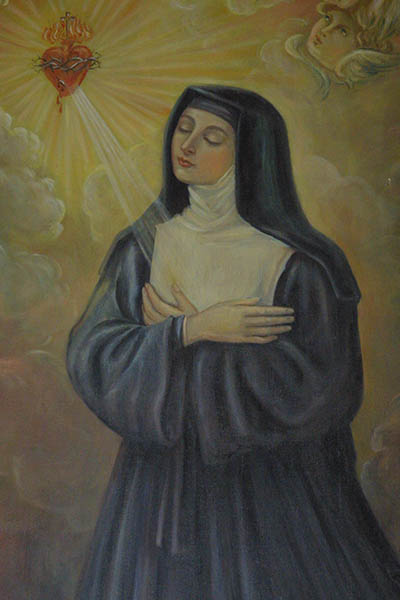 St. Marie-Marguerite D’Youville, religious (†1771). Memorial in Canada. As a young widow, she founded a religious Association dedicated to serving the poor and the sick, which eventually became the Order of the Sisters of Charity of Montreal, commonly known as the Grey Nuns. First native-born Canadian to be canonized.

St. Margaret Mary Alacoque, virgin. Optional Memorial. At the age of 24 she entered the Visitation Convent at Paray-le-Monial (France). Our Lord appeared to her several times, asking that a feast be dedicated to His Sacred Heart. It was the Jesuit St. Claude de La Colombière, her spiritual director, who supported her in the initiative to make these requests known. She died in 1690, at the age of 43. (In Canada: transferred to Oct. 20.)

St. Hedwig, religious. Optional Memorial. Duchess of Silesia and of Greater Poland, she was the aunt of St. Elizabeth of Hungary. Born in Baveria, she was married at the age of 12 and had 7 children. Together with her husband, she was an advocate of the poor and founded the hospital at Wroclaw. among others. After the death of her husband and of 6 children, she took the habit of the Cistercians in the convent of Trebnitz, where her only surviving daughter was abbess. She died in 1243. (In Canada: transferred to Oct. 20.)

St. Gerard Majella, religious (†1755). Redemptorist coadjutor brother, he sanctified himself by fulfilling the humble duties of sacristan, gardener, gatekeeper, nurse and tailor in the monastery.

St. Gall, abbot (†645). Formed in the monastery of Bangor, Ireland, he became a disciple of St. Columban  and one of his twelve companions on the mission to continental Europe, where he worked tirelessly to spread the Gospel, particularly in the region of present-day St. Gallen in Switzerland, where the Abbey-Cathedral of St. Gall stands in the place of the original hermitage he built. See: Western Civilization Passed through Their Hands.

Blessed Augustine Thevarparampil, priest (†1973). He carried out his apostolate as a parish pastor in Ramapuram, India, and laboured for the conversion of many, finding his strength in the Blessed Sacrament.

St. Lullus, bishop (†786). A monk from Malmesbury Abbey in Wiltshire, England, who joined St. Boniface in the evangelization of Germany, becoming his closest assistant and successor, being appointed by him as Archbishop of Mainz.

St. Longinus. (†first century). Roman soldier who pierced the side of  Jesus crucified with a lance. According to tradition, the lymph that flowed from the divine side cured him of near-blindness and converted him.

St. Anastasius, hermit ( †c. 1085). When he was a hermit on the island of Tombelaine, close to Mont Saint-Michel, he was invited by St. Hugh to enter the monastery of Cluny. He died in Pamiers, having spent his final years in solitude.

Brothers and sisters: It was not through the law that the promise was made to Abraham and his descendants that he would inherit the world, but through the righteousness that comes from faith. For this reason, it depends on faith, so that it may be a gift, and the promise may be guaranteed to all his descendants, not to those who only adhere to the law but to those who follow the faith of Abraham, who is the father of all of us, as it is written, I have made you father of many nations. He is our father in the sight of God, in whom he believed, who gives life to the dead and calls into being what does not exist. He believed, hoping against hope, that he would become the father of many nations, according to what was said, Thus shall your descendants be.

R. The Lord remembers his covenant for ever.

You descendants of Abraham, his servants,
sons of Jacob, his chosen ones!
He, the LORD, is our God;
throughout the earth his judgments prevail. R.

He remembers forever his covenant
which he made binding for a thousand generations –
Which he entered into with Abraham
and by his oath to Isaac. R.

For he remembered his holy word
to his servant Abraham.
And he led forth his people with joy;
with shouts of joy, his chosen ones. R.

“Everyone who speaks a word against the Son of Man will be forgiven,
but the one who blasphemes against the Holy Spirit
will not be forgiven.
When they take you before synagogues and before rulers and authorities,
do not worry about how or what your defense will be
or about what you are to say.
For the Holy Spirit will teach you at that moment what you should say.”