Whether recollecting herself to celebrate the Passion of the Lord or rejoicing in the Resurrection, Dona Lucilia helped to place those around her in a Catholic perspective of genuine equilibrium. 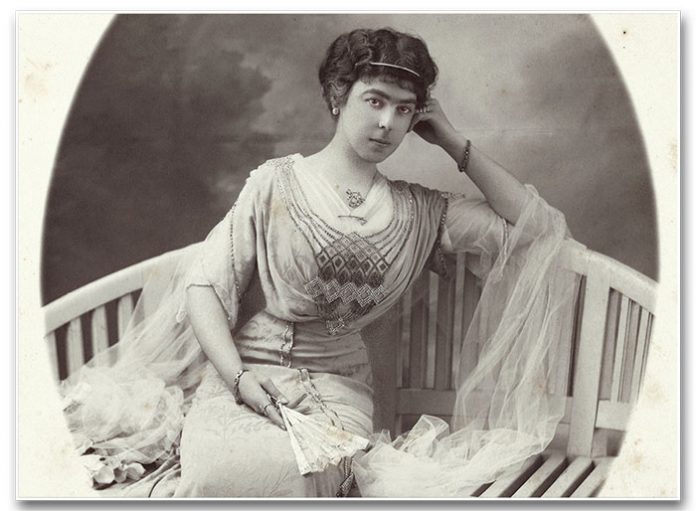 Dona Lucilia’s conformity with the spirit of the Church made her a loyal fulfiller of its religious practices. In those bygone days of the 1920s, still fragranced with the sweet aroma of St. Pius X’s beneficial presence on the Pontifical Throne, she loved the sacral splendour with which the Liturgy imbued the solemn commemorations of the principal mysteries of the Faith. The faithful took part in these celebrations, whether by practicing the devotions recommended by the Church, or attending the divine offices. Dona Lucilia piously participated as far as her delicate health permitted.

But she did not limit herself to this. At home, she endeavoured to create an atmosphere in keeping with the feasts of the liturgical calendar. Such was the case with Good Friday and Easter.

“See how He is weeping for you”

During Holy Week, for instance, Catholic families traditionally draped their statues and crucifixes in purple, as in church. The children refrained from playing, and the adults from amusements. Most people dressed in mourning and everyone spoke in low voices as a sign of sorrow for Our Lord Jesus Christ’s Passion and Death.

Gathering the little ones around her, Dona Lucilia explained the stations of the Passion to them with all seriousness, helping them understand the dreadful consequences of sin. To move her young listeners to compassion for Our Lord, she showed them devotional pictures, and with words geared to a child’s comprehension, she said:

“See how He is weeping for you. He is also weeping for others, because He suffered for everyone.”

On Good Friday she gathered all the family members of the household, and at three in the afternoon, she organized a prayer vigil before a crucifix she had inherited from her dear father.

Dona Lucilia opened the vigil by leading the Litany of the Sacred Heart of Jesus, followed by the Litany of Our Lady. Then she interceded for the souls of all deceased relatives; she did not forget a single one. These vocal prayers were alternated with silent prayer, during which everyone remained recollected. No one thought of leaving.

The vigil over, Dona Lucilia left the candle burning next to the crucifix until it was nearly consumed. On the following day, after a brief prayer, she wrapped the holy image of the Redeemer in silk paper and put it away in a drawer for the next year.

After the sombreness of Holy Week, starting from noon on Holy Saturday, the triumphant joys of the Resurrection began and she strove to have the children experience this joy. On street corners, boys could be seen carrying out the traditional scorning of Judas, in retaliation for his thousand-times-infamous betrayal of Our Lord Jesus Christ.

Also on Holy Saturday, Dona Lucilia organized the following day’s excursion and would always oversee the preparation of an assortment of treats and sweets for the children to enjoy.

As the sun rose on the Easter Sunday of 1915 or 1916, the day promised to be one of innocence and happiness. It was the family custom every year to take the children to the park for an Easter picnic, and the night before Dona Lucilia had filled a wicker hamper with Easter eggs, drinks, and sandwiches.

The front door of the Ribeiro dos Santos mansion opened, and, under the watchful eye of the governesses, a throng of children poured into several taxis, which carried them in a clamorous cavalcade through the tranquil streets of Campos Elíseos. Dona Lucilia would go along, adding a touch of watchful calmness. She generally chose Antarctica Park for the open-air revelry.

Arriving at the park, the children were at their liberty to run about the grounds, under the shade of towering trees. As the little ones dispersed, the governesses, following Dona Lucilia’s instructions, hid the delicious sandwiches amidst the foliage – with fillings of Portuguese sardines, pork loin, ham and cheese with sliced hard-boiled egg – as well as the chocolate and sugar candy Easter eggs wrapped in silver foil. These hollow candy eggs were filled with a pleasant surprise of bonbons. When everything was ready, Dona Lucilia called the children to come and discover the goodies, and they happily came running.

The lively hunt began. Plinio, not an enthusiast of races, lagged behind, reasoning to himself: “Mama will know the way out.” The others searched eagerly for the hidden delicacies, proclaiming their first discoveries with cries of glee. As Dona Lucilia watched the childish exuberance with pleasure, Plinio turned to her and asked:

“Tell me, Mama dear, where are they hidden?”

“Filhão, you need to look for them!” [Filhão is the augmentative of filho – son, meaning, literally, “big son.” Dona Lucilia frequently used it as a term of endearment for Dr. Plinio. –Trans.]

After a little while he insisted:

Then, looking toward one of the hiding spots, she said with a smile:

“Filhão, see what you find over there.”

Confident that the maternal advice was setting him on the right path, he followed the direction of Dona Lucilia’s eyes. She remained seated, watching him. If he did not manage to find the desired treats, she would go over to him.

In his usually emphatic way, he said again:

“Mama, I can’t see those eggs! Please tell me where they are, because I am not finding them…”

Then she encouraged him:

“Keep looking! Look over there a little.”

At last, Plinio discovered a collection of goodies – all of his favourites. Indeed, they had been hidden there especially for him. He hugged and kissed Dona Lucilia as a sign of filial gratitude, and then she affectionately bid him:

A captivating aura of sublimity

Dona Lucilia’s placid serenity amidst that innocent fun taught the children to seek joy only in those forms of pleasure that produce and maintain a stable, calm, moderate and cheerful well-being. This was not to be exchanged for anything that brought agitation, even if it offered a type of pseudo-joy.

She was opposed to all feverish or frantic ways. Her balanced temperament favoured this, being a veritable reflection of order, and always upright in its enjoyment.

As a result, her soul sought beautiful and marvellous things, creating an aura of sublimity around her. Witnesses from that time readily claim that there was a certain atmosphere in the room when Dona Lucilia was present, and that it changed completely when she left. This explains why the children of the family cherished her company. ◊

The Power of Eternal Predestination

To Those Who Love!

A Message Received with Love and Devotion

Spirit of Love and Peace

Love of Authority and the Priesthood

Assistance in Any Situation

“Kintsugi” and the Art of Divine Pardon

The Happiest Donkey in History