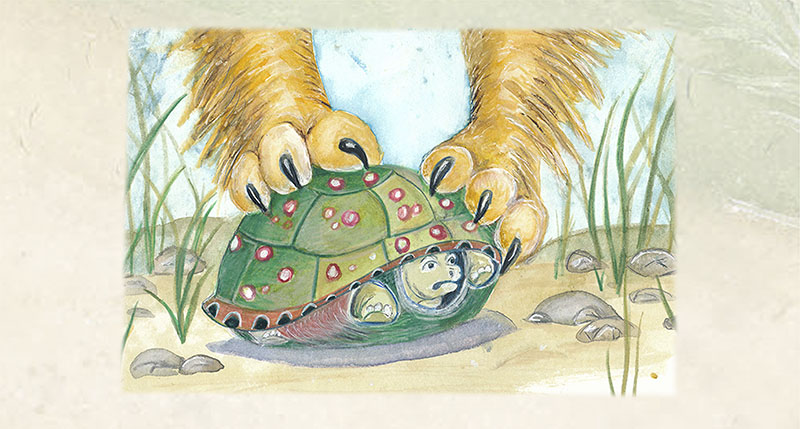 What chance does the tortoise have? Its speed is minimal, it has no one to ask for help, and it is incapable of fighting. It has only one defence…

IIt is another day on the vast African savannah. The sky is a deep blue, the sun is blazing, and all the different animals are occupied in their normal activities. Some are mild-natured, and coexist peaceably with their neighbours. Others, however, are of a more aggressive temperament…

It is dinnertime, and the lioness is on the lookout for something to eat. She strolls quietly along the plain, discretely observing different groups of animals from afar, in search of the most likely meal. She walks with a leisurely air, as if she were merely passing the time, with no particular interest. But everyone is wise enough to know that a lioness prowling around at this time of day can only be looking for food.

“How tired I am today,” she says to herself. “I haven’t the strength to hunt for large prey. I think I’ll look for something simpler to eat. But what will it be? So far I have only come across swifter animals; to chase and capture one of them, I would spend all my energy.”

The lioness wanders on, certain that she will soon find just the right prey to satisfy her appetite. And so she does: a few metres away, she spies a tortoise is making its unhurried way along the ground. Pretending not to have noticed her victim, the lioness casually draws nearer, gloating to herself: “Aha! This tortoise will make a delightful appetizer for my meal. When it least expects it, I will pounce on it and finish it off in no time!”

The tortoise is slow but clever. It sees the predator approaching and thinks: “Hmm… A lioness following me at this hour of the day? That lazybones must be wanting to eat me! How can I escape? This shell I carry doesn’t allow me to run.”

The big cat finally comes up alongside the tortoise, and, disguising her intentions with a friendly air, she strikes up a conversation:

“Oh, how do you do, tortoise? What a pleasant surprise it is to find you here! I have never seen a tortoise close up. Tell me, how are all the other members of your clan?”

Realizing that it could not flee, the tortoise quickly came up with an idea to save its life.

“The pleasure is all mine, lioness! Unfortunately, all is not well with us tortoises… The scientists who often come to visit this region have just discovered a terrible disease in our species. It seems to be a type of toxic fungus; anyone who touches us or eats us would be seized with dreadful convulsions and would die in a few minutes!”

“Is that true?” gasps the feline.

“Sadly, yes. In fact, we have all been feeling very strange for some time now, without knowing why. But at last everything has become clear. We are all devastated, for from now on we will no longer be able to have any contact with the rest of the animals. We will have to segregate ourselves completely, otherwise we will infect the entire population of this savannah.”

The lioness, seeing the failure of her plans, replies dismally:

“Oh, what a pity… My deepest sympathy. Well, I must be going. After all, I don’t want to be infected, or to pass this plague on to the other members of the pride. I wish you all a speedy recovery!”

Dejected, the cat turns around and slinks away to seek her meal elsewhere, while the tortoise laughs over the trick it has just played.

As she retreats, the feline broods over her misfortune; she is now famished, and can hear the rumbling of her empty stomach… But suddenly, she comes to her senses and realizes she has been deceived! Enraged, she runs back.

“Oh, no! Here comes my enemy! She has caught on to my ruse. And now how am I going to get myself out of this predicament?” 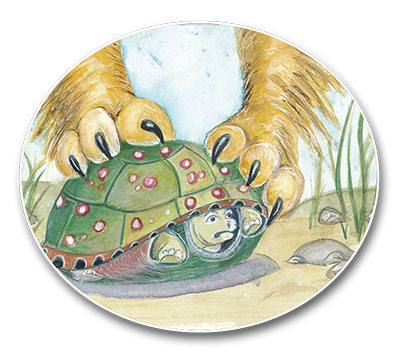 What chance does the tortoise have against the lioness? Its speed is minimal, it has no one to ask for help, it is incapable of fighting. It has only one defence left: to enter its fortress!

Overtaking the reptile in a few bounds, the lioness cannot believe her eyes. “What? Where did that tricking tortoise go? I saw it just now! Did it leave its shell and run away? Or could it be inside?”

Intrigued, she turns the tortoise this way and that, looking for some way to reach her prey. But in vain. Nearby, other wild creatures begin to observe her antics and they laugh among themselves to see the lioness playing “ball” with a tortoise. So absorbed is she, however, in unravelling the “mystery” that she pays no attention.

After rolling and tossing the shell around at length, the lioness finally admits defeat and returns home, hungry and humiliated. The triumphant tortoise, for its part, only ventures from its shelter several minutes later – a little dizzy, it is true, but safe and sound! Then it continues slowly on its way, eager to join the other tortoises and tell them of its escapades.

We are in constant danger, because our “adversary the devil prowls about like a roaring lion, seeking someone to devour” (1 Pt 5:8). In moments of trouble, we have an unfailing shelter: the sacred mantle of Our Lady! Like an invincible fortress, it is truly the refuge of sinners and protection for all who find themselves in difficulties and afflictions. Those who confidently turn to the maternal protection of the Blessed Virgin will always emerge victorious from the attacks and snares of the infernal enemy! ◊

The Happiest Donkey in History

Where Will I Live?

Owe Nothing to Anyone